The Royal Arch Degree is the climax of Ancient Craft Masonry and Masonic Symbolism. It is described as “the root and marrow of Freemasonry.” 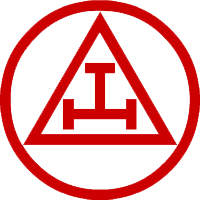 Royal Arch Masonry is the first order a Master Mason joins in the York Rite. The Chapter works the following degrees: * The Mark Master Mason degree is in some respects an extension of the Fellow Crafts’ second degree. In some jurisdictions the degree is conferred in a Fellow Craft Lodge, that is, the second degree of the Blue Lodge. * The Past Master (Virtual) degree is conferred because of the traditional requirement that only Past Masters of a Blue Lodge may be admitted to Holy Royal Arch. Because there are so many applicants for this degree, Virtual Past Master is required to qualify them for it. Much of the work is the same given to install the Worshipful Master of a Blue Lodge. There is no such requirement or procedure outside the USA. * In the Most Excellent Master degree the building of King Solomon’s Temple, which figures so prominently in Blue Lodge, has been completed. In England the degree is conferred by Cryptic Councils, along with three other degrees below. * The Royal Arch Mason degree is said by many to be the most beautiful degree in all of Freemasonry. Following the convocation of Supreme Grand Chapter in England on November 10, 2004, there are significant ritual differences from that worked in the USA, fraternal inter-relations remain as before. Freemasons who reach this degree may continue to Cryptic Masonry or go straight to Knights Templar (where permitted—requirements vary in different jurisdictions)

The Mark Master Degree is believed to have originated as a ceremony of registering a craftsman mark in those years distinguished by the operative craft masons and their temple building. It was later developed into a full fledged degree by the Masonic fraternity as we know it today. Some scholars say it was the earliest degree and may predate all others by many years. It is highly regarded by students and ritualists as one of the most beautiful degrees in all Masonry, teaching lessons that have proven of value in all walks of life. Some Grand Lodges place so high an eminence on the Mark Master Degree, that they confine it to the jurisdiction of a separate grand body, the Grand Lodge of Mark Master Masons.

The Past Master Degree

The Past Master Degree came into being because originally the degree of Royal Arch was conferred by the Symbolic (Blue) Lodge only on actual Past Masters. This degree was instituted to make it possible for all worthy Brethren to receive the Royal Arch Degree. The first record of its conferral is found in 1768 in England.

The Most Excellent Master Degree

The Most Excellent Master Degree is a product of American innovation. It was conferred in Royal Arch Chapter as early as 1783 in Middletown, Conn. It is by far the most spectacular degree in all Freemasonry. It is the only degree that brings forcibly to our attention the completion and dedication of King Solomon’s Temple. The very idea upon which all Masonic symbolism has been based.

The Royal Arch Degree is the climax of Ancient Craft Masonry and Masonic Symbolism. It is described as “the root and marrow of Freemasonry.” It is the complete story of Jewish History during some of its darkest hours. Jerusalem and the Holy Temple are destroyed. The people of Israel are being held captive as slaves in Babylon. Here you will join with some of the captives as they are set free to return home and engage in the noble and glorious work of rebuilding the city and the Temple of God. It is during this rebuilding that they make a discovery that brings to light the greatest treasure of a Mason – the long lost Master’s Word.