Councils of Cryptic Masons form the center body of the York Rite of Freemasonry. A Master Mason may join a Chapter of Royal Arch Masons and receive the four degrees of that organization. After which he may seek further knowledge in Freemasonry and join a Council of Cryptic Masons. 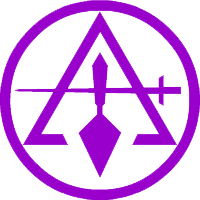 No rite of Freemasonry has come into its own so much as the series of degrees known as the Cryptic Rite, also known as the Cryptic Masons. Its popularity is well deserved for there are no more beautiful or meaningful degrees in all Freemasonry that those conferred in the Council of Cryptic Masons. One reason for its popularity is that it completes a story, a Masonic allegory. Freemasonry is very philosophical and teaches its ideals by allegory or story. This philosophy is moralistic and religious however Freemasonry is not a religion., nor a substitute for one. A requirement for membership in Freemasonry is a professed belief in God and eternal life. It is mandatory that a man profess a personal faith in a Supreme Being prior to becoming a Freemason. Fremasonry never attempts to alter any one’s beliefs. Freemasonry offers no theology or plan of salvation. However, it does offer a moral plan to use in this world. Leaving the Mason to look to his religion for salvation into the next world. Ancient Cryptic Masonry centers around the story of the preservation, loss and recovery of the Word. The Word represents man’s search for life’s purpose and the nature of GOD. Symbolic Freemasonry, as in the Lodge, teaches of the loss of the Word and hope for its recovery. Royal Arch Masonry, as in the Chapter, teaches its recovery. Cryptic Masonry, as in the Council, completes this story by teaching of the Word’s initial preservation.

ORIGIN OF THE DEGREES

As in many of the Masonic degrees, the origins of the degrees of Cryptic Masonry are shrouded in mystery. Yet, they have attained a substantial growth and one out of every two Royal Arch Masons is a Cryptic Mason. Nearly two hundred years ago the degrees of Royal Master and Select Master appeared. Traveling Masonic lecturers throughout the East were conferring them upon Masons, while engaging in instructing in Craft (Lodge) and Capitular (Chapter) degrees. Even one Supreme Council of the Scottish Rite included the degree of Select Master as one of its “detached” degrees. But, these beautiful degrees were not to remain detached for any length of time. The state of Connecticut bore the first Grand Council in 1819. In Virginia and West Virginia the degrees developed in the Chapter of Royal Arch Masons where they still remain. In the 1870’s a General Grand Council was formed for the United States of America. Today this Grand Council numbers most of the Grand Councils in the United States, as well as the western section of Canada. The Shriners (Ancient Arabic Order Nobles of the Mystic Shrine) limits its membership to Knights Templar (York Rite) and 32 degree (Scottish Rite) Masons. Until a few years ago, Cryptic Masonry was not a series of degrees which one had to take to meet requirements to join the Shriners or the Commandery of Knights Templar. However, in recent years a large number of Grand Commanderies of Knights Templar have made the Cryptic degrees a prerequisite for the Temple orders. Also, making it a York Rite perquisite for the Shrine. It appears that even more Grand Commanderies will adopt this policy in the years ahead.

THE VAULT AND THE MYSTERIES

The Most Excellent Master Degree is a product of American innovation. It was conferred in Royal Arch Chapter as early as 1783 in Middletown, Conn. It is by far the most spectacular degree in all Freemasonry. It is the only degree that brings forcibly to our attention the completion and dedication of King Solomon’s Temple. The very idea upon which all Masonic symbolism has been based.

THE USE OF THE NAME CRYPTIC

The degrees of the York Rite are classified as Symbolic (Lodge of Master Masons). Capitular (Chapter of Royal Arch Masons), Cryptic (Council of Cryptic Masons), and Chivalric (Commander of Knights Templar). The Cryptic Rite or degrees derives its name from the setting of the degrees of Royal Master and Select Master in the underground crypt beneath King Solomon’s Temple. The word cryptic means hidden, hence its use in describing these degrees. The last of the series of Cryptic degrees is not cryptic because it does not comply with the requirement of a vault scene. It might be regarded as one of the Cryptic Rite’s detached degrees for it has no connection either in history or symbolism with those of Royal Master and Select Master, as shall be discussed later.

This is the first degree of the Cryptic Rite as conferred in the United States of America. Candidates who receive the degree are impressed with its dignified ritual and relevant teachings. It contains one section which is generally regarded as an outstanding display of symbolism and content of philosophy. The ritualistic presentations in the degree explain the articles contained in the Holy of Holies of King Solomon’s Temple, including the Ark of the Covenant. A knowledge of which is essential to those who would fully understand the preceding degrees. The principal characters in the degree are Solomon and his royal assistant.

The degree of Select Master has not always been associated with that of Royal Master. Jeremy Cross, a traveling Masonic lecturer, author, and educator of the early 1800’s, is given credit by most writers for having combined the two degrees into one rite. There is strong evidence to support the theory that the degree came from a similar degree in the Scottish Rite called Intimate Secretary or Grand Tiler of King Solomon. Regardless of its origin the legend of this degree is old. The scene of this degree is laid in the underground vault of King Solomon’s Temple. The events which characterize the degree are stirring enough to make it one of intense interest. The ritualistic presentations contain the story to “complete the Circle of Perfection” in Ancient Craft Masonry.

As we have stated, the degree of Super Excellent Master is not a degree of the Crypt. But, it relates events that lead to the recovery of the lost Word. This degree beautifully tells of a period in history in which all Freemasons are interested, that period following the destruction of the first Temple. The essence of the degree is foretold in the presentation by the Principal Sojourner in the Royal Arch Degree when he makes reference “Zedekiah was one and twenty years old when he began to reign and he reigned for eleven years in Jerusalem, and he did which was evil in the sight of the Lord his God,”etc. The degree of Super Excellent Master is one of the best devised, most impressive, and beautiful degrees. It is most enlightening and relevant to one’s daily life. In a display of exciting events, Biblical characters come to life exemplifying the historical drama of the Holy Bible. Here Nebuchadnezzar rules again; Zedekiah proves the results of his wicked life; Ezekiel and Jeremiah prophesy the promises of Almighty God.